How Japan promotes its competitive system in the areas of higher economic potential by Luca Ebreo, member of EIEAD’s Scientific Committee

“we hereby report the speech by Dr Luca Ebreo,  member of EIEAD’s Scientific Committee, during the Forum EIEAD on June 23rd, in SEAFUTURE 2018 La Spezia, on board the Italian Tallship Amerigo Vespucci” 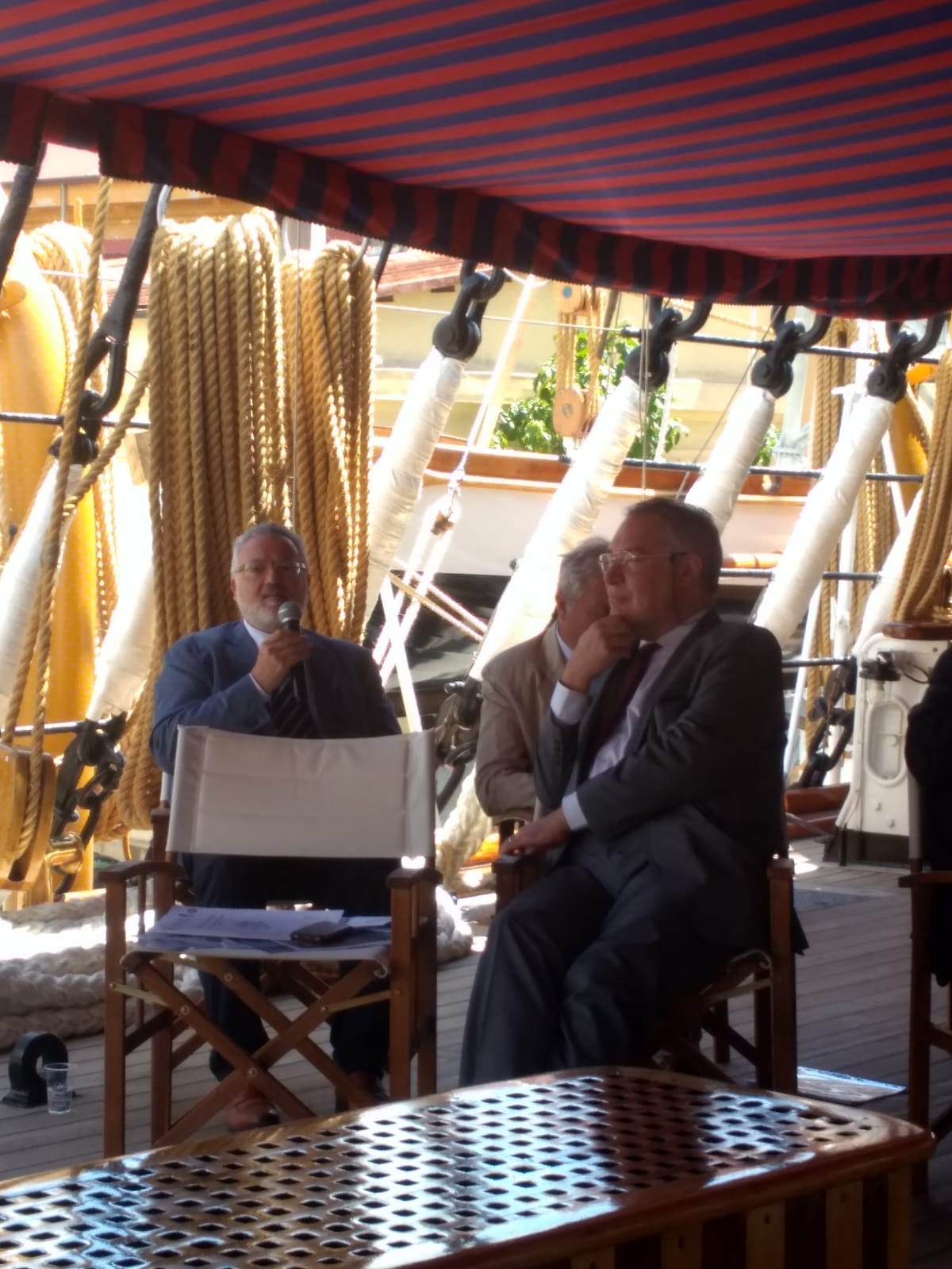 he collapse of the Soviet Union in the 1991 Central Asian nations and Japan, established diplomatic relations and partnership began to increase steadily as manifested by the level of official contacts. In 1997, the “Silk Road” Diplomacy concept was formulated for Japan’s policy toward Central Asia.

In the beginning of 21st century, we see activation of new actors including India, Korea and Japan in Central Asia, which were mainly welcomed in the region. Tokyo recognized the growing strategic importance of Central Asia in the context of international security and sought to play a more active role as an Asian nation in Eurasia.

During two decades Central Asian nations and Japan, partnership began to increase steadily. Japan is one of the largest assistants to Central Asia in structural reforms and Japanese investments to the different aspects of region economy and transport communication add up to several billions.

There are several areas of special interest to Japan in its relations with Central Asia, including cooperation in education, economic development of the region, political reforms, as well as energy resources. Japan’s effort in creating the “Central Asia plus Japan” dialog is part of its multilateral diplomacy.

The region of Central Asia borders with the Caspian Sea in the west, western China in the east, Russia in north and Afghanistan, China and Iran in the south. Kyrgyzstan, Uzbekistan, Kazakhstan, Tajikistan and Turkmenistan form parts of the region collectively called Central Asian Republics or States. According to one report, Kazakhstan possesses 15 percent of world’s uranium reserves (essential for the atomic reactors of Japan1), and three and four percent of the world’s oil and coal respectively. The country has the largest chromite, zinc and lead reserves in the world. Five percent of the world’s natural gas reserves are located in Turkmenistan. Uzbekistan has 0.8 percent of the natural gas reserves of the world. According to country’s Mineral Year Book 2010, Uzbekistan possesses 5,300 metric tons of gold.

According to the website of the Ministry of Foreign Affairs of Japan, total Foreign Direct Investment of Japan in Kazakhstan was US $470 million and 1.4 billion yen in Uzbekistan by 2016. By the same period, Japan imported commodities worth of 6.766 billion yen whereas exported commodities and goods worth of 9.411 billion yen. The figures show the balance of trade in favour of Japan. Export commodities of Japan to the region are motor vehicles, steel pipes and tubes, machinery for constructions and mining, rubber products, food and meat, etc. Ferroalloy, crude oil, petroleum chemical products, rubber-manufactured goods, vegetable material and clothing form imports of Japan from the region.

Central Asian countries and Japan during almost two decades extended bilateral relations and multilateral partnership. Japan’s ODA program provides considerable technological and infrastructure construction to all Central Asia countries, but with some differentiation. Japan until now had official support for the economic development of the five countries in the amount of US$ 3.5 billion, was invited to Japan to train more than 5000 professionals and 800 students.

In the field of energy, Japan is seeking for new partners as many other countries. Japan consumes 200 million tons of oil and 55 billion cubic meters of natural gas, and this number is expected to reach 100 billion cubic meters by 2020. Main oil suppliers of Japan are Middle Eastern countries, followed by South East Asian countries and Russia with a very small amount. Considering the increasing demand on energy resources and the unstable situation in the Middle East, it is possible to say that Japan is also looking for alternative energy resources both to balance Chinas influence in Central Asia and to diversify its options.

It is important to analyse latest developments. For example, Japanese Prime Minister Shinzo Abe visited Central Asian countries and Mongolia in 2015, and his visit was concluded with the signing of several agreements on energy and infrastructure works worth approximately 45 billion US dollars. Moreover, Japan invests in Turkmenistan, which is China’s important energy supplier, to build social infrastructure and facilities and to strengthen ties in the field of energy, Uzbekistan to build power plants to produce different kinds of energy resources, and Kazakhstan to build nuclear power plants. Central Asian countries that lack energy resources also benefit from Japans support. Japan supports Tajikistan in the fields of agriculture and water facilities, and Kyrgyzstan to build highways and to renew Manas Airport. In the upcoming years, we can expect Uzbekistan and Turkmenistan to be on Japan’s agenda with high priority.

Besides energy resources, rare-earth metals are of interest to Japan as well. China produces 93% of the world’s total and Japan is the bigger user of rare-earth metals. However, because of the crisis on the disputed islands between the two countries, Japan is willing to reduce its dependence on China and consequently support Kazakhstan’s works on the rare-earth metals production. According to a study, Second Secretary of the Embassy of Japan in Bishkek stated that Japan does not look to Central Asia because of its oil and gas, but because of regions rare earth metals, drawing attention to the new area in which Japan is in need to diversify its resources.

Another area of cooperation is related to security, nuclear non-proliferation. Cooperation in this particular field between both countries is a natural outcome considering the Fukushima accident and Kazakhstan’s experiences. In August 1991, Nursultan Nazabayev, President of Kazakhstan, ordered the closure of the Semipalatinsk site, which was the nuclear test site of the Soviet Union. In addition, it is important to recall that Kazakhstan was the first country to handover its nuclear weapons to Russia among all Commonwealth of Independent States. Central Asian countries and Japan have similar understanding on this topic. In fact, with that perspective, in 2006 all the Central Asian parties signed The Central Asian Nuclear-Weapon-Free Zone Treaty (the Treaty or the CANWFZ Treaty) which came into force in 2009.

Finally, considering the fact that Japan does not have direct connections with Central Asia, it considers and uses different options. Japan aligned itself with India in the framework of regional projects on regional connectivity and transportation corridors. Currently, there are three possible ways to connect Japan with Central Asia: Trans-Siberian Railway (TSR), China Land Bridge (CLB), and Turkmenistan-Iran’s Chabahar Port. However, the first two options are losing their relative advantages and therefore, Chabahar port has gained importance for Japan. Chabahar port is located in the Southeast of Iran, approximately 50-70 km away from Pakistan’s Gwadar port, which was constructed by China as an important pillar of China-Pakistan Economic Corridor (CPEC), which is worth around 46 billion US Dollars. Japan, together with India, declared their intention to invest in Chabahar port and support the construction works of a regional logistic hub around the port. Japan’s investments in Iran will be the main connector of Japan-Central Asia corridors, which also include two neighbouring countries of Central Asia, Afghanistan and India. It can be argued that, as an alternative to unlike Chinas initiative, Japan is supporting works to establish a north-south corridor rather than east-west corridors.

1 Japan is the world’s third-largest nuclear-power nation in terms of the number of civilian nuclear plants in operation.